We had a referral this week from a client whose friends were burgled while abroad on holiday. This is the story of that experience, with the kind permission and pictures supplied by the victims. We never disclose details of our clients so some detail is excluded to ensure that their identity is not compromised. We have also added commentary where this helps to add clarity to some of the experiences of these and other clients.

Taking a well earned rest after the Christmas period the victims had a call from a member of their family who discovered the break-in, during a routine visit. On receiving this news, they decided to cut short their holiday as it was too distressing to know that they had been burgled.

This is how the burglars entered their home by simply smashing one of the double glazed doors at rear of the property. Most people believe their homes are secure when locked? Locking is important but should only be part of an overall security strategy that has many elements, including a professionally installed and maintained alarm system.

Inside, this is the scene that greeted them in one their rooms. Other rooms were similarly thoroughly ransacked. The thieves had systematically searched every room going through personal items in their search for anything that they could easily convert to money. Remember these thieves have no respect for you or your property, they want to maximise what they can get with the least amount of effort and risk. They are prepared to smash open anything if they think there might be something of value in there. Alternatively, they might take something shiny because it looks valuable whereas in reality it only has value to you. We have known people to have the ashes of a loved one stolen because of the shiny vessel that they are held in. 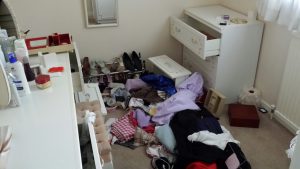 So in addition to the obvious feelings of violation for the victims, there were the items that were stolen. We are unable to give full details, but in addition to a significant sum of cash, there were a number of expensive items of jewellery and irreplaceable family heirlooms.

If you have ever been in the same unfortunate position you will know that this is not where the worry and psychological distress ends. Your home suddenly becomes slightly alien to you and at night every little noise, that you used to ignore, seems to be the sound of someone trying to get in. You are constantly searching your memory trying to remember everything that you own and where did you leave it?

Eventually you have what you think is a comprehensive list of missing items. Then the process of your battle with the insurance company commences. Whilst we were present one of the victims was on the phone to the insurance companies for around 45 minutes trying to make progress with their claim, having had no reply to earlier emails. You are only trying to recover a fair cost of what has been stolen, but an insurance company will want you to provide evidence that you owned a specific item in the first place and how much you paid for it. So where are all of your receipts or more accurately where were they when you last saw them before your home was ransacked?

We made contact with the unfortunate victims and within 24 hours they had their GuardHome alarm system installed and fully operational. This is because we operate a free Fast-Track system for burglary victims, where we aim to have a system installed in the shortest possible time.

We cannot take away the distress of the violation and the on-going frustration of trying to deal with the resultant effects of burglary, but we can give you genuine peace of mind afterwards. We have seen enough victims to understand how stressful the whole situation becomes and we are here to provide a genuinely sympathetic and practical solution to our first basic rule of burglary.

Prevention is much better than cure.